Mike Shanahan is reaching for heaven 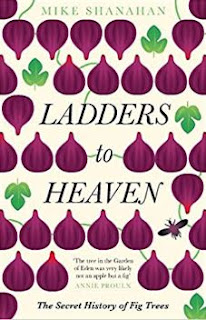 Happy new year everyone! Where is my 2018 in review, you ask? I've moved swiftly on. A, because I couldn't pick my favourite book and B, because I've only actually launched the blog in July 2018, so is it really fair? No, you see.

I kicked the year off on a high though with Ladders to Heaven by Mike Shanahan. Not only is this the first Unbound book that I've bought (I wish I'd participated in the funding!) but it's also one that I've been eyeing up for a while.

Ladders to Heaven is, as you see on the cover, The Secret History of Fig Trees. It might as well be the history of secret(ive) trees, on the other hand, because who would have thought that fig trees are this fascinating? The book covers everything from myths and legends mentioning them, through famous biologists who have uncovered hundreds of different species (and how they did it), to how fig trees helped re-populate islands and territories affected by volcanic eruption. Amazing stuff.

I am a sucker for books on random topics, and Mike Shanahan has written a fascinating, in-depth and comprehensive account of these amazing creatures that I knew very little about (even though there's a fig tree growing - strong word - on my balcony!). I've learnt about how fig trees were considered flowerless - until (spoiler alert) it was discovered their flowers grew on the inside of their fruit. I've learnt about fig-wasps, these specialised little creatures who are the sole spreaders of fig pollen. I've understood why so many cultures worship these trees even today. Birds, bats, monkeys, insects and a whole range of other animals also make an appearance on the scene.

But further to this, Shanahan - who has written for, amongst others, New Scientist, The Economist and BBC Earth - is a great nature writer. He has immense experience in travelling and observing fig trees up close and personal, and his enthusiasm can't help but rub off on the reader: "It is hard to explain, but I could feel the concentration of life around me, as if its great density there had somehow reached into me physically. What struck me was the neutrality of that force. There was no malice or love there, just existence."

Lots to be said for lovely illustrations here and there: 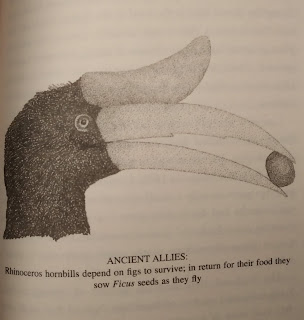 What was I not massively fond of?

There was quite literally only one section I cringed at a little, and only because for me, here the author entered - if only for a brief section - into dangerously soppy-land (page 28). More specifically, just this:

Other than this small, monk-related section, I think Shanahan keeps things factual, brilliantly descriptive and vivid all the way through.

A few years back, I had a little taster of the fascinating lives of fig trees in a New Yorker article by Ben Crair, and Shanahan has expanded my knowledge and interest massively. Unlike The Glorious Life of the Oak, which was short, high-level and mostly poetry, this book delivers in giving a comprehensive image on these fascinating trees.

Fig trees have helped populate desolate land and have survived volcanic eruption. They have over 700 different species and can be found all over the world. They can look like this (mind you this is one single tree): 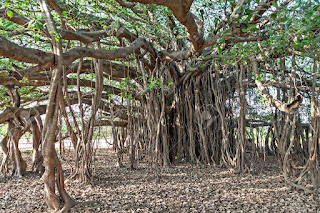 So why the hell wouldn't you want to learn more?

You're on my arrogant bookish blog. I'm not necessarily booker than you - we may be equally bookish. But I'm taking a risk.
I review books that I feel strongly about, one way or another. Books that speak to me or grip me, from all walks of life - with a preference for travel/nature writing, literary fiction and general non-fiction. They're not even necessarily new. It's just what I picked up recently.
Arrogant, you might say? Hang with me.